This diversion will allow you to use the walks from Parc-Le-Breos House, parking your car at Green Cwm car park.

Park your car at Green Cwm car park which you can find easily using the sign posts from the Gower Heritage Centre in Parkmill.

From the car park cross the lane which leads to Parc-Le-Breos House and head through the gate which leads into Green Cwm. a little way further on your left hand side you will see Giants Grave.

Giant's Grave is a neolithic (4000-3000 B.C.) tomb belonging to the so-called Severn-Cotswold group. The burial site was first located in 1869 when it was plundered for stone. It was then re-excavated in 1960-61 by R J C Atkinson. Bone fragments belonging to 40 individuals have been recovered. All were adults except for three. Also discovered were two rims of Neolithic pottery. Take a look at the rounded stones on the southern corner of the tomb - it is thought the stones were washed by a river which once ran alongside the tomb, but has since found its way underground into the limestone rocks below.

Continue up the valley until you meet a cross roads. Turn left here and follow the forestry road for a mile or so uphill. Eventually the track will end in a clearing -  continue along the well-worn path which bears left and then crosses over a stile out of the woods and onto Cefn Bryn common.

Now take a left turn following the track in front of you. Follow the track for half a mile until you meet a tarmac lane. Turn left, following the lane down hill, where you will come across a cattle grid .

This is the point where you have rejoined the walking route from Parc-Le-Breos. Left would take you to the green gate out of the woods from Parc-Le-Breos, while straight on will take you across the main road and on to Three Cliffs Bay. 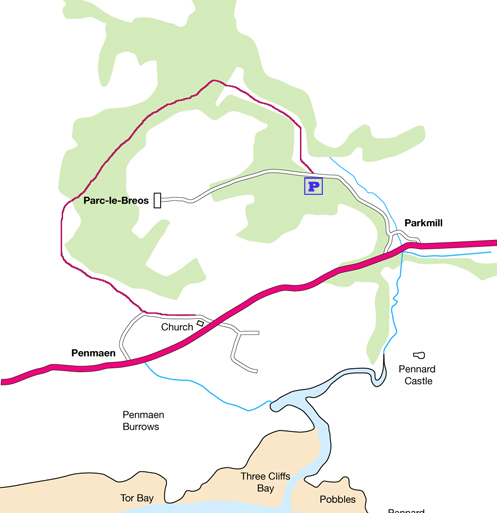 For the latest news and special offers, follow us on Social Media: